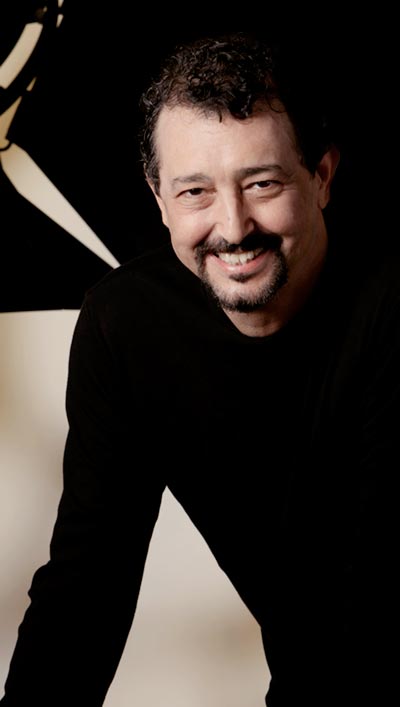 Chico Mazzoni, Bahiano from Salvador, born in 1954, studies in the best high schools of Bahia, and has his first of oil paintings exhibited at the Portuguese Center of Reading in Salvador at the age of 13, in an intercollegiate collective exhibit.

As an architecture student, he continues to work in fine arts and to exhibit his works, concentrating his artistic activity on the conception and elaboration of scenography for Bahian theatre. During this period, he gradually abandons oil painting and embraces sketching on paper, among his more varied techniques, giving preference to pastels in lieu of oils.

In 1978 he wins a scholarship and travels to Italy to do a Masters’ Program in Monument Restoration at the University of Naples. During his post graduate studies, he participates in a collective exhibit in Florence and at an art Biennial in Naples, where he lives and studies for two years. He makes the most of the opportunity to visit Europe’s main museums and art exhibits while perfecting his design technique.

He returns to Brazil in the beginning of the 1980’s and continues to work in various sectors of art creation, giving priority to sketching on paper and scenography. The scenario of the opera “La traviata” is in this period at the Castro Alves Theatre, as is the proposal “Caras Cores” (“Dear Colors”) for the Carnaval Decoration of the City contest (elaborated with a partner).

He had his first individual exhibit – called CHICO MAZZONI- SKETCHES – at the Alliance Française Gallery of Salvador in 1983. From this point on, he works professionally with sketches and paintings, regularly exhibiting his work in collective shows and galleries in Salvador and other cities, such as São Paulo and Vienna.

In 1984, still not abandoning sketching, he inaugurates his phase of acrylic paint on paper and cardboard in the exposition “IMAGINÁLIA”, which deals in an aggressive manner with archetypical and quotidian images. These same themes are broached in an even more radical manner in the exposition “ARTE-DE-COR” (“ART OF COLOR”) in 1985, where he attempts to explore the maximum potential of color, his main character in acrylic painting. His next exposition, “CENA & ÓTICA” (“SCENE AND OPTICS”) of 1987, follows the same line of acrylic painting on cardboard, though now using random art themes from scenic arts to maximize his language.

Missing sketching, he returns to it in the end of the 80’s and puts on the exposition “DEZENHO” (“The ZEN in Sketching”), at the Bahia Art Museum. Here he searches for the essential in the stroke, in simplified forms, that is, he searches for the ZEN in art. In 1990 he puts on the exposition “PAR OU ÍMPAR” (“ODD OR EVEN”) at the Brazil-Germany Cultural Institute (ICBA). Here he works with the idea of the complementary, the yin/yang, in a “gestalt-like” search for images, from which the living relationship between sketching and painting reveals itself. This exposition marks the beginning of the fusion of figure and background, which makes images less defined. This characteristic will affirm itself in his following exhibits.

Along this trajectory he alternates his artistic activities of architecture, restorer, scenographer and designer.

Between the end of the 80’s and the beginning of the 90’s, he projects and constructs his own atelier, where he definitively established himself with the necessary space for his multiple activities.

In this period he is invited to teach a Specialization Course in Restoration in the School of Architecture at the Federal University of Bahia (UFBA), a biennial course offered to students from Portuguese and Spanish speaking countries. The next period is one of withdrawal, and the preparation to return to oil on canvas, which comes about in the exposition “POR ESTA LUZ QUE ME ALUMIA” (“For This Light that Enlightens Me”) in 1995, at Diagrama. Here he expands his formats and pursues light as the greatest objective of his painting, in diffuse images that tend to mono-chromatist and confirm the search for fusion of figure and background. The availability of a larger space provided by the new atelier enables him to progressively amplify the format of his paintings.

In 1996 he becomes a university professor at the School of Architecture where he worked for three years. In 2000, he obtained a full professorship at the University of Salvador (UNIFACS) and teaches FINE ARTS in relation to Architecture.

In 1997, he puts on a big exposition called ”ESTAÇÃO DA LUZ” at the Museum of Sacred Arts of Bahia. Here his search for light in painting radicalizes onto canvases in large formats.

In order to keep himself up to date on contemporary art production, Chico has travelled frequently along these years to visit museums, exhibits and Biennial expositions.

As a scenographer, Chico has taken his work to other Brazilian capitals. As a sketch artist and painter, he owns works acquired by Brazilian and foreign collectors.

In the month of May of 2000, he puts on his biggest individual exposition called “Milênios no ar” (“MILLENIUMS IN THE AIR”) in the Bahia Design Center (Trapiche Adelaide), Salvador/Bahia. The exposition is a reference to the diverse myths of human history utilized as thematic support for his present aesthetic research that, though treating light as a protagonist in the scenes, explores much more the nuances of this light through transparencies, veiled images, camouflage, divergences and superposition.

The MASTER OF BAHIAN PAINTING project included Chico in a collage of clips with 25 Bahian artists in commemoration of 500 years of Brazil’s Discovery. It was aired by TV BAHIA (Globo Network) in 2000 and 2001.

Celebrating 20 years of career in 2003, he puts on the exposition “BRASILIANA” reflecting and reinterpreting Brazilian identities in a set of 20 paintings which synthesize all of his accumulated learning on the languages of art. BRASILIANA received great public and critical acclaim, and part of it was shown again as a special exhibit at a series of events of the Cultural Market at the end of the year. The group of paintings represented the “caboclos (negro descendents) of the Bahian 2nd of July”, pertaining to the BRASILIANA series, are incorporated to the Southward Art Collection in Buenos Aires, Argentina.

Since then, he has participated in collective exhibits and other events linked to art and culture.